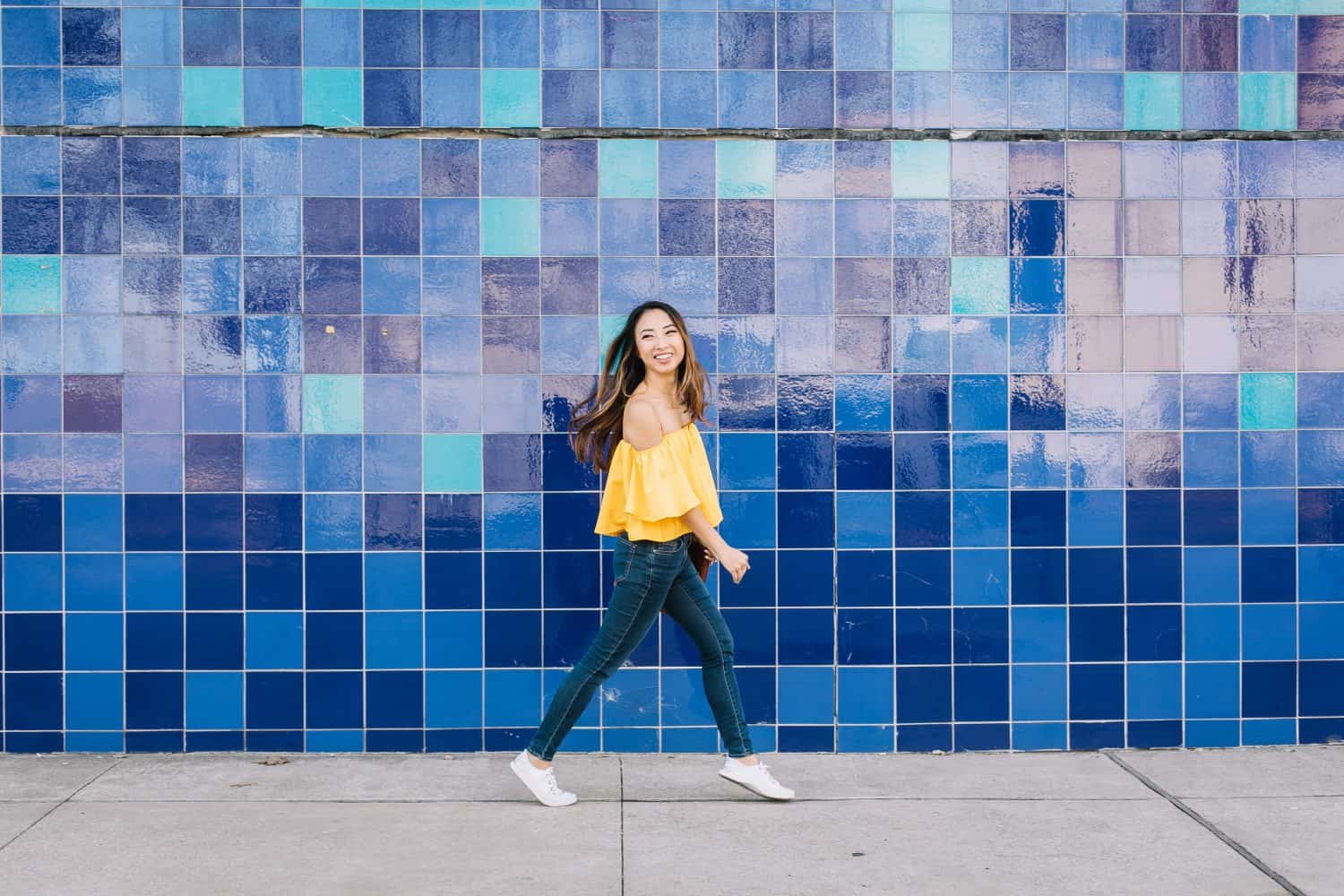 In 2010, the term ‘social media influencer’ was not yet coined. Facebook, Twitter and YouTube were the leading social media platforms. Pinterest launched in January 2010 and Instagram in October 2010. At the same time, Jane Ko was just 21 years old, and launched her blog, A Taste of Koko.

A decade later, A Taste of Koko was voted best local blogger in Austin by the Austin Chronicle in both 2018 and 2019. In 2019 she published her first book, KoKo’s Guide to Austin, a pocket-sized guidebook on Austin Texas. Her blog has been featured in O Magazine, InStyle Magazine, OWN TV Network, Travel Channel and many more.

With a decade of influence to reflect on, we connected with Jane for ten questions about her ten years of influence.

Let’s start from the beginning. Where did the idea for the influencer blog start?

I bought the domain, ATasteOfKoko, in March 2010. I was in my junior year in college at UT Austin where I was getting my degree in nutrition. I just knew that I wasn’t going to pursue further higher education to become some sort of doctor or lawyer. I kept thinking that I wasn’t on the same path as many of my peers and I didn’t know what I was going to do. I was reading a couple of national blogs at that time and they were all created by women.

I was very inspired by these women that had websites for themselves and could write about anything. I got on GoDaddy and thought atasteofkoko.com. I started originally as a baking blog and then pivoted.

Was there one specific social media platform you leaned on to promote your blog in the beginning?

Yes, Pinterest. I was doing a lot of baking and cooking at home. As a college student, I didn’t pay for any magazine subscriptions but instead I relied on Pinterest to look at how people plated and styled their food. That’s kind of how I got my feet wet, just pouring through Pinterest and looking at beautifully styled food photos. I tried to figure out how those professional photographers and stylists created these beautiful plated foods. And I just tried to replicate that at home. 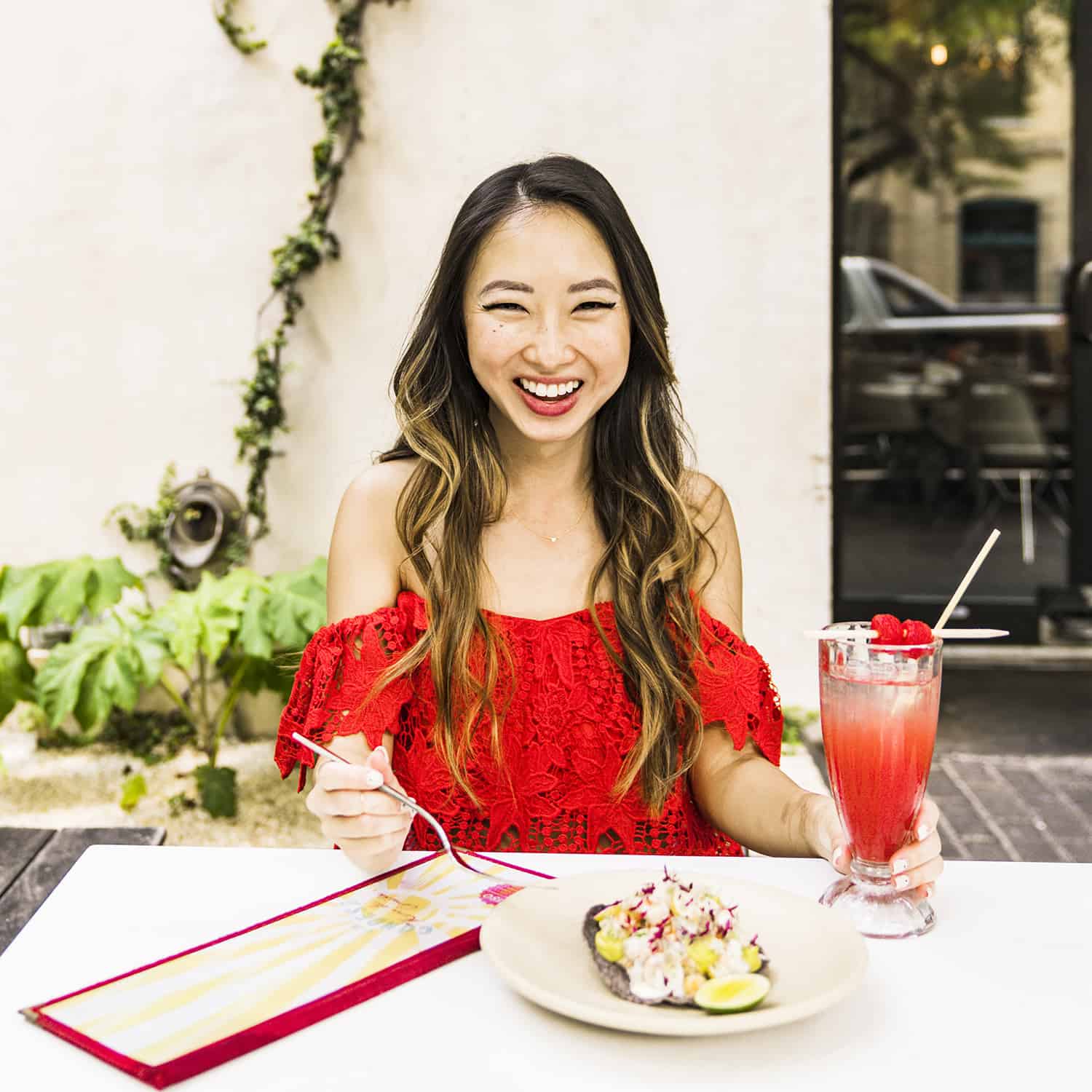 Most bloggers start off with a full-time job and blog on the side. When you started, were you working full-time and if so, when did you make the switch to blogging as your career?

When I started in 2010, none of us knew that you could do blogging full-time nor did we know you could make any money from it. Back then I was thrilled to get like a bag of sugar sent to me for content. Then I started getting like $50 or $100 and that was a lot of money as a college student!

I started working full-time in social media out of college. I have a background in social media working at different brands and agencies. I quit my job in 2015 when the company I worked for became a toxic situation. I had planned on going back to find a full-time job in social media, however, in 2015 I felt like that’s when the industry kind of changed. At that time, brands started allocating parts of their advertising budget to working with bloggers.

I began getting more and more partnerships each month which kept putting off my job search to the next month and the next. I told myself that I would look for a full-time job when the campaigns stopped and they’ve just never stopped.

Do you remember your first influencer partnership?

Besides the bag of sugar?! (laughs)

There are different milestones in my career that I fondly remember.  The first partnership I remember came when I was only three months in. It was with Mutual of Omaha which was doing a tour throughout the U.S. interviewing entrepreneurs. I remember the contact, Jenna, because she recently reconnected with me.

I don’t really remember many of the early partnerships because I think there are so many but I remember my first big one was with Carnival Cruise Line in 2016. For me to get contacted by Carnival Cruise Line with such a big deal because growing up my dad would save money for us to buy tickets to go in December, when it was slow season.

Being able to take my dad on a Carnival cruise was one year is such a fond memory. I remember he said, “I can’t believe this. This experience is something that I used to take my little daughter on and now she’s signed a contract with Carnival to create content.”

I was not an early adopter. I’m not really an early adopter because I feel like I don’t want to spend time on something if it might fail. I think I probably signed up with a personal account maybe six months after it launched in 2010. At the same time I did claim “ATasteofKoko” because having worked in social media I knew that it was important to claim your name on all platforms, regardless if you’re going to it or not.

I think my first photo was me eating gelato at Costco! After about a year I realized I should be using it professionally too. 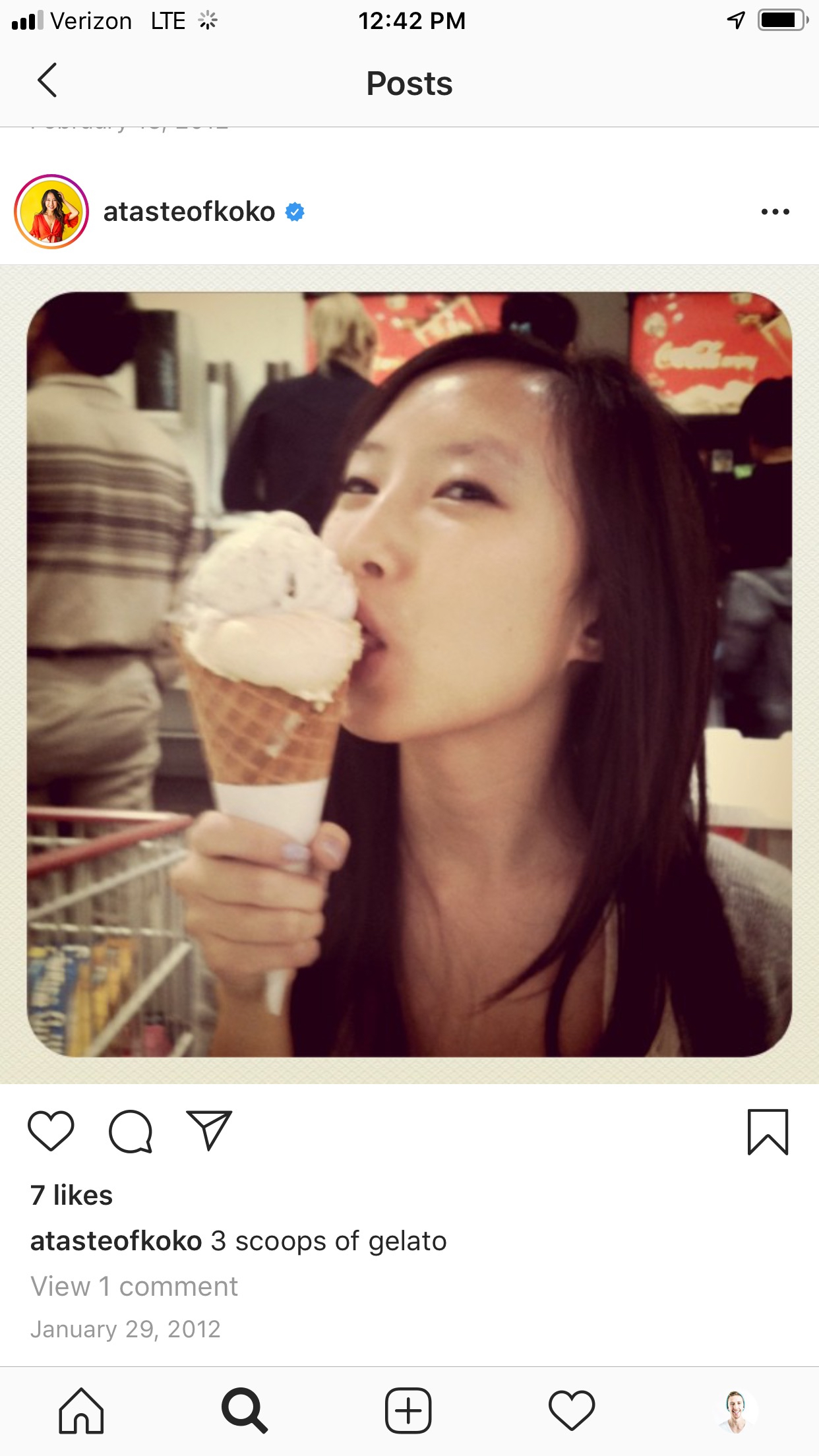 Successful influencer marketing campaigns vary from brand to brand. What do you believe is the most successful campaign you’ve worked on?

It would be GoDaddy for sure. The GoDaddy partnership was successful for a variety of reasons. They entirely sourced influencers for the campaign which can only be done successfully if the team that is managing the influencer campaign has that kind of knowledge. Because they did it internally, they fully understood the program needs, the program KPI, and they knew exactly the kind of person they wanted to market to and bring the program to life.

This partnership was a really authentic fit because I’ve been a loyal customer and brand advocate for GoDaddy since day one.  That doesn’t happen for a lot of campaigns. It’s very rare that you get to work with a brand that you actually love and advocate for.

When I saw GoDaddy in my inbox for the first time, I almost thought it was spam. I never see a brand that I love actually email me wanting to work together! The perfect kind of partnership is when you find an influencer who is already an advocate for your brand.

I think that’s why GoDaddy was such an organic partnership. I’ve been a loyal customer. It was 10/10 the perfect partnership and it has become a continuous partnership. We’re on our third partnership now.

Brands understand that working with influencers helps them to reach their target audience. What can you tell us about your followers and how you engage with them?

My audience is about 70 percent female and 40 percent of my followers are between the ages of 25 to 35 which has been very appealing to advertisers. It’s the sweet spot in a person’s life where they are willing to splurge and spend money.  My demographic is almost 60 percent in Texas so that’s been very appealing because Texas has become a very in-demand market.

A lot has changed in social media in ten years, how would you describe how you have changed in that same period?

I feel like I’m in a unique position. One-hundred percent of my life online is my real life. Because I started my blog in 2010 and there wasn’t a pretense of making money from it, I just started it by being myself.  I haven’t had to change my lifestyle. 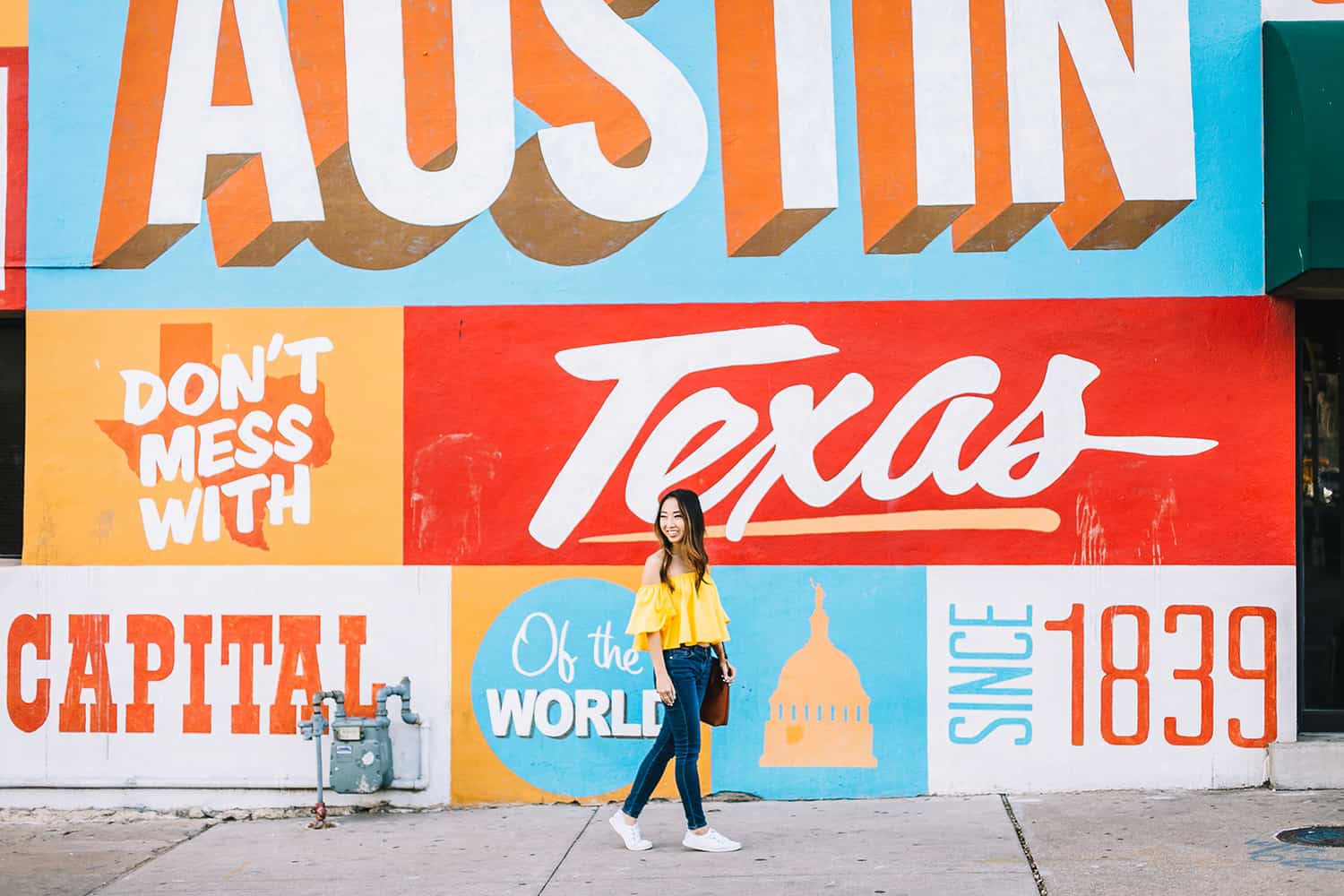 Looking back on all that you’ve accomplished in this last decade, is there one thing you would have done differently?

No, I’ve never had a mindset of regret. I’ve been very lucky to get to where I am now. It’s not like there is a playbook outlining what you do each year to grow your brand as an influencer/blogger.

I feel confident in all that I’ve done in the past that has led me where I am today. In 2010 I didn’t have any expectations of what this could be. I didn’t have the option of hiring an assistant or a photographer. I didn’t have a mentor who had done this before. I’ve had to learn this all on my own. I don’t regret anything, even investing 80-100 hours into this each week.

What advice would you offer bloggers today as you look toward the next decade?

Do I really have to look toward the next decade of Influencer blogging? (laughs)

I want to go back to longevity. It’s easy for anyone to start a business and just start putting up content. Maybe you’ll get a brand deal in year one. The chances of you making it to year two or year three are slim if you’re not putting in the work. You have to think about the audience you want to serve. You have to define your niche.

The secret to my success is that I’ve put in so many hours and done so much for my community. I don’t do any of these things with the assumption that I’m going to get anything back, it’s really a gamble. That is why my brand has been so successful, because of how much content and value I’ve provided my audience and how much I’ve given back to the city I’m in.