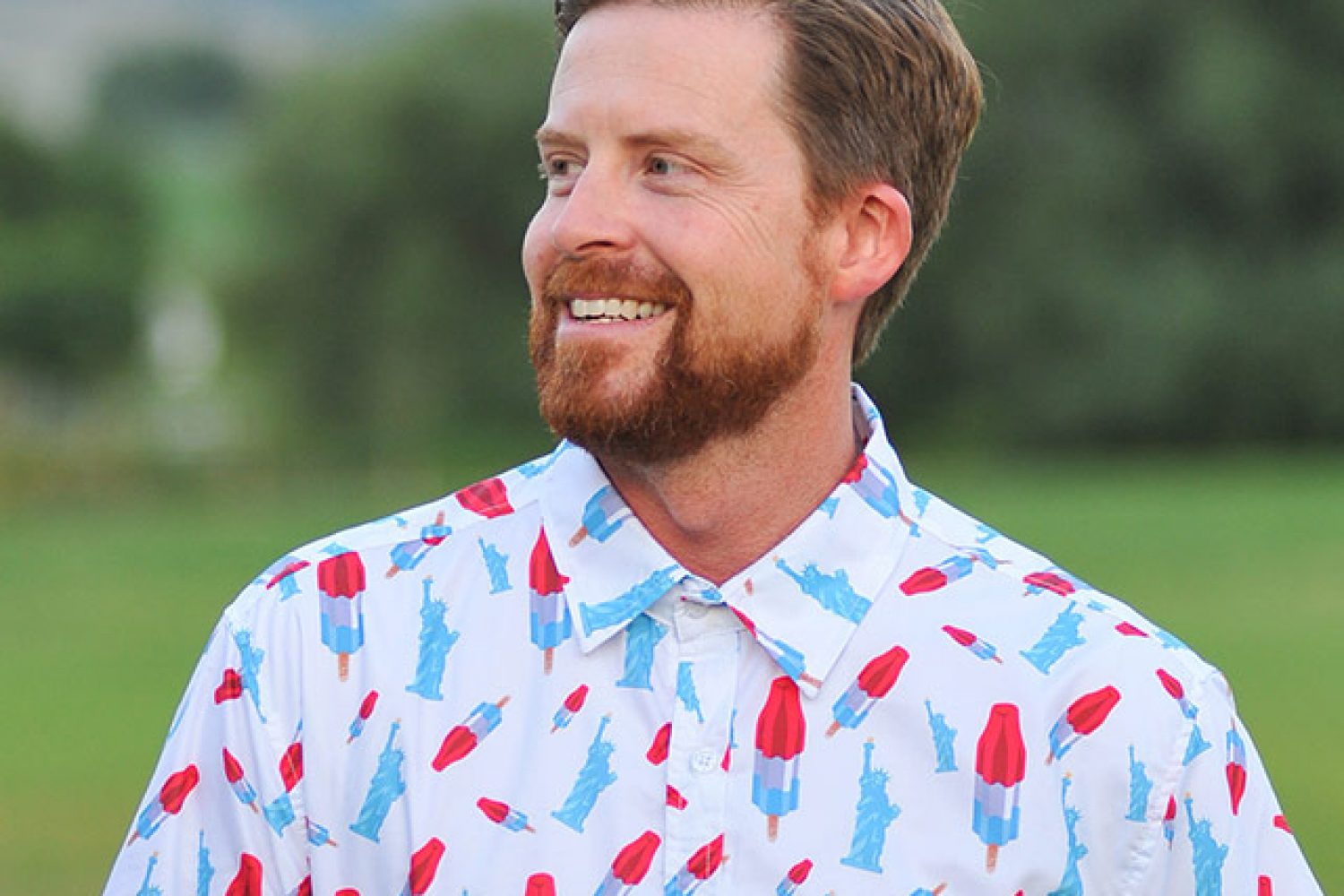 This is part four of an ongoing series where we will come to know more about the men of influencer marketing.

Social media influencers are everywhere. Seriously. Everywhere. But have you looked closely at who these people really are? At Find Your Influence (FYI), we have more than 100,000 influencers who have opted in to our network to be discovered by brands around the world to participate in influencer marketing campaigns.

When I first started at FYI in August 2018, I was shocked by how many women are part of the FYI network. 84 percent are female. That leaves just 16 percent of the network led by men.

Who are these men? What makes them so successful? Why do they do what they do?

On Monday, October 15, I spoke with Alan Lawrence of That Dad Blog to learn more about his beautiful family and what inspired him to start his blog. What follows is my conversation with Alan:

Tell me about yourself, Alan. How did you get started as a blogger? Is this a full time role or a side hustle?

“When my second youngest son was born with Down Syndrome, it was pretty traumatic for me. In the following months I realized it was something that was more of a blessing than a negative. I felt guilty about that. When he was born and I was looking for different resources available about Down Syndrome, I noticed there weren’t a lot of positive articles available, especially coming from dads. I wanted to be part of the good news. Years ago when you would search for information about Down Syndrome it was all negative news. I wanted to create something different that would rise above all that to show that while there are some challenges, there is also a lot of joy.

As time went on, I started to feel more comfortable talking about my personal interests and my family of six kids. The idea of big families in today’s society is really where I’ve found my niche today.

Chick-Fil-A was the first brand to reach out to me and asked if I would be interested in getting involved in a campaign. And I thought it would be fun to try. It felt really natural and they liked the content. From there I really started thinking about putting my foot in the influencer realm. It’s really just gone from there.

When my son was born, I was working full time in the marketing department for a running shoe company. I’m also a photographer and a graphic designer.  I had the opportunity to create a couple of fun photo series with my kids that went viral. The last two weeks actually have become a little bit more full time for me on the social side for me.”

Is the blog where this all started? How have you transitioned to other social platforms?

“Currently I’m using my blog, Instagram, Facebook and YouTube. Instagram is really where it took off. My blog and Instagram were started at the same time but it was the photos of my son Will flying that really caught everyone’s attention and gave me the thought of taking this onto a bigger storytelling platform. Once Will was born, I wanted to share my Instagram for more than just personal platform but to help other dads who may be going through the same challenges with special needs kids as I was.

You’re active and engaged across four channels. Where do you find the time?

“I’m still trying to manage the time between being a good dad, working full time and then doing this on the side. I’ve now gone part time in my other role because it finally got to the time where the brand collaborations and partnerships are able to float us financially. I’m slowly stepping away from a job that I really loved to do something that I love even more. I’m walking with faith into this new direction in my career and hopefully take it to the point where I can fully step away from my other job and put more time into this. “

I can hear your passion and enthusiasm for this! In order to build something so strong across all of these platforms, you have to be committed to your followers. Tell me about them and how you engage with them.

“It’s kind of funny that my accounts are called ‘That Dad Blog’ so you would think the majority of the people who follow me are men but it’s 90 percent women. I work in partnership with my wife quite a bit. I feel like I’m a lot more open than the average male in my demographic would be as far as sharing personal feelings. I find myself reaching out to my wife to find out what she thinks, from a female perspective. I really appreciate her opinion and it’s valuable knowing that 90 percent of my followers are women.

As far as the interactions with the men who follow me, it’s very personal. I feel like men feel too vulnerable in sharing and putting themselves out there. That’s one thing that I’ve tried to help with, to let men know that they have a voice out there. Women are doing a great job but we also need to talk about the father’s feelings and create support groups through social media to be able to help dads express their feelings and be better dads. We need to learn from each other.

There are a lot of personal struggles I share, specifically related to having a child with special needs. I shared about how it was really hard, and about how I was not happy at first to know that my son had Down Syndrome. I didn’t want to sugarcoat that, I wanted to be honest. A lot of people responded and appreciated the honesty. People want to know the good news but finding a cadence and the balance of the good and the bad is important. Being honest and feeling comfortable putting yourself out there was a real struggle for me at the start. It’s become much easier for me as I began trusting the people who follow us after having open, honest and real conversations with them.’

Since it’s called “That Dad Blog,” tell me a little about your family.

“We have six children ranging from 16 to 3. They’re all so different from one another. My oldest, my daughter is kind of a shy, really intelligent introvert. Her brother, my oldest son, is very outgoing, charismatic and has a really great sense of humor. Our second oldest son is a mix between his older siblings. He’s in that awkward 11-year old stage right now where he’s trying to figure himself out. He really loves his younger brothers and has a good heart but leans more toward the shy side. My daughter Ali struggles with weight but is a really confident girl who likes to take over my Instagram Stories sometimes. I think sassy is a good way to describe her. It’s the cutest thing. It’s kind of created a separate following. People keep asking me to have her create her own account but I think she’s too young right now. My two younger boys Wil (5), who happens to have Down Syndrome, and Rockwell (3). I tell most of my stories around my two youngest because it’s kind of this dynamic about my son who has Down Syndrome and his brother who is this “average” kid. I think that’s the dynamic that people really enjoy watching because it’s a big family in general but also watching my younger two grow up together.

My oldest daughter doesn’t really like to be in pictures, she’s kind of a private person so I respect that with her. Ali is very open to most anything, she wants to be a YouTube star herself. My two older boys are timid but they are open to it.

My wife is the glue that holds it all together. She’s the one who keeps me sane and on track. She’s the rock. We’ve been married for 23 years now.”

Along the way, you’ve worked with different brands. Tell me what you’re looking for in a brand partner.

“I’m looking for something that I would actually use or something that can help to make my life better. At the start, when I was kind of new to it, I agreed to promote some brands that ultimately didn’t feel natural. I did one for a food brand that I wasn’t really interested in and didn’t end up feeling was a good fit but I guess I more or less did it for the experience. It didn’t flow right and my followers could tell it wasn’t authentic.

Doing things that feel right, that we actually use and that we can get behind are what we look for.”

The biggest one I follow is Father of Daughters. He is a great writer and I love his sense of humor.  Him and his wife have a fun dynamic. I know he works part time along with doing his social media so I can relate to that challenge.

I feel like there’s not a strong community of dad bloggers that is easy to find. There is a small network of dads that I’ve found through their outreach or I’ve stumbled upon through Instagram search. This smaller network includes dads of kids with special needs that I’ve become friends with. I’m friends with a lot of mommy bloggers whom I speak with a lot but not a lot of dads. I don’t mean for that to sound terrible but it’s something I can be a voice in helping to change in some way so dads can feel comfortable sharing their opinions too.”